When I was a young ‘un I used to love the Christmas period. Well, I still do, but I used to love it even more and nothing signalled the arrival of Santa Claus (and the birth of some other dude… Ghandi?) than Christmas specials hitting TV and wintry films arriving at the cinema. There was Home Alone, Miracle on 34th Street and The Santa Clause to name but three. Yes, the early 1990’s were a golden age for Christmas films. It was also a golden time for The Santa Clause’s Tim Allen who was still enjoying his fame thanks to Home Improvement. Although since then, he donned a space suit and started yabbering on about going to “Infinity” (an impossibility), the loon has been unable to find regular employment. Nowadays however, I rely on Die Hard and Die Hard 2 to get me in the mood for Christmas. Nothing embodies Christmas like Bruce Willis in a vest. So how does Rise of the Guardians fare in bringing about some Christmas cheer… despite being set at Easter?

Rise of the Guardians is every child’s fantasy come true. Or I like to think it would be, as kids are a bit “too” mature nowadays and probably fantasise about semi-naked pictures of Justin Bieber or Miley Cyrus more than true fantasy. Regardless, Rise of the Guardians follows the exploits of a superteam of Santa Clause / North (Alec Baldwin by way of Moscow), the Easter Bunny (Hugh Jackman), the Tooth Fairy (Isla Fisher) and the Sandman (voiceless) as they fight the resurrected evil that is the Boogey Man / Pitch Black (Jude Law). However, to stop the nefarious Pitch Black from eradicating the joy from every child on Earth and shattering their belief in the four heroes, they need the help of a newly selected Guardian: Jack Frost (Chris Pine). But Jack has issues. Cue the story…

The premise certinaly isn’t unoriginal. It’s also quite delectable timing considering how The Avengers have primed audiences for big team ups this year. And how do you get bigger than Santa Clause and the Easter Bunny teaming up? Well, I guess you could pursue South Park’s Super Best Friends route, but we all know how well that would go down nowadays considering who is in that team. He who shall not be named… No, not Voldermort you fool. Someone else. Anyway, getting back on track, the story itself has a nice set up and follows a tale of temptation and redemption. Sure, you’re not going to see a twisting Seven Psychopaths style storyline, and you can probably see every twist and turn coming (it’s a kids’ film after all), but it’s one of those movies that you can switch off and just enjoy for what it is.

Now I’m going to need to draw on a few other big animated films from this year in order to assess its quality. Namely, Ice Age: Continental Drift, Brave and Madagascar 3: Europe’s Most Wanted. I’m well aware that I’ve reviewed other movies that are “animated” this year, but I’m excluding the stop-motion brilliance of Frankenweenie and the creditable ParaNorman (let’s also forget about Wreck-It Ralph, as I annoyingly have to wait until February to see this thanks to a lapse UK release schedule). So how does it compare? Well, favourably. I wouldn’t say it’s better than those other films per se, but it is different, and is equally enjoyable. This goes for both adults and children. In fact, I’d argue that it’s far more enjoyable for the youngsters than any other animated film this year. Bold statement, but there we go. It combines those childhood fantasies with a superhero-esque team up. How can that not be enjoyable?!

Regular readers will know I never applaud actors for essentially just reading from a script to lend voices to a film and this will be no exception. All voice work is fantastic and I especially loved Alec Baldwin‘s North – beautifully Russian and beautifully funny too. It’s also nice to see Jackman in something a little more “cuddly” than late. I’m sure Les Miserables will alter his image in the public’s eye too (though to me, he’ll always be Wolverine). 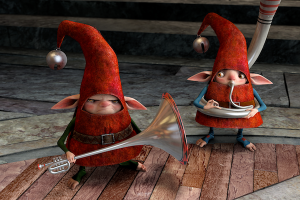 What I’m more inclined to comment on here is the quality of the animation. Once again, it’s utterly sublime. At least to my eyes. Another fantastic job from the guys at Dreamworks. Hell, if you see Pixar or Dreamworks stamped in front of a movie, you know you’re getting a quality looking piece of work. It doesn’t always tie closely with the quality of the film itself, but is always a reliable gage of animation quality, which is no bad thing.

Although the film was fun overall, I just felt it was a bit vapid in places. It’s hard to put my finger on why this is exactly, but I didn’t leave the screen thinking it was as solid as it could have been. I was engaged, I laughed and I enjoyed it all, but something was lacking for me. Don’t get me wrong, Rise of the Guardians is a solid film and one that probably deserves to be seen this December, especially if you have kids, but it doesn’t leave me as spellbound as it should do. Or maybe I’m just still bitter about not having Wreck-It Ralph in the UK yet. Bah humbug indeed.

All in all, Rise of the Guardians is a beautifully put together Christmas film. It’s just one that’s lacking that biting edge and indeed lacking Christmas itself, despite the copious amounts of snow on show. Considering the film’s set at Easter there’s a hell of a lot of snow on show. I mean, where is it set? Siberia? Considering the thin smattering of Christmassy films on show this year, Rise of the Guardians should be your ideal choice to get you in the mood. Especially if you have children, who’ll simply lap it up.

But me? I’ll be going to Nakatomi Plaza again and “we’ll get together, have a few laughs…”, as Bruce himself says to me on an almost yearly basis. Because, as well know, nothing really represents Christmas like a load of guns, terrorists and Holly McClane ruining John’s December year after year. Yippee-ki-yay turkeystuffer!!