Teenage issues eh? Ungrateful parents who’ve never done anything for you in their entire lives, issues with your body getting more bumpy and bulbous (hopefully in the right areas), and invoking magic to get your own way to prevent an arranged marriage. Wait… what?! I’m sure we can all attest to two out of those three issues. If you can say “yes” to all three then kudos to your for being brought up in mediaeval Britain with wizards and warlocks. And if you’re reading this, then I guess Paganism really pays off considering you’d be about 8-900 years old by now. AND you managed to find Film Phage. You sir, or madam, deserve a medal. Or an eye of newt, whichever you want.

So why am I bothering to invoke references to teenage life and mediaeval times? Well, you can thank Brave for that. Pixar’s latest animated endeavour focusing on the story of Merida (Kelly Macdonald): first born to King Fergus (Billy Connelly) and Queen Elinor (Emma Thompson) of Scotland. Her tale isn’t a new one: a young girl feels controlled by her overbearing mother, wants to rebel, rebels, deals with the repercussions of doing so and learns a lesson. You could take any Disney / Pixar / Dreamworks story and put the same framework over it, which is why I went into Brave not exactly expecting much; especially since I feel jaded after my last foray into the animated world with The Lorax. But you have to give credit to Pixar… they sure do know how to show and tell a story!

Whilst regular readers will know I get especially hung up on predictable plot lines, I guess you have to forgo these irritations in any U / PG-rated movie aimed primarily at kids, so I will. For now. Beyond this, my reasons for my initial frostiness towards the film stem from the trailers not engaging me in the slightest. They were devoid of humour and quickly became stale. Couple this with the hoo-ha surrounding the “first female protagonist of a Pixar film” and I was turned off. Making a fuss of gender – for me – means there’s nothing much else to brag about in the film. If you felt the same, then I urge you to put this aside, as the film is definitely worth your pounds and pennies, dollars and cents, or pieces of eight… whatever. 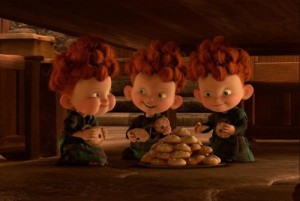 Ginger children: no matter how many buns they eat, they’ll never gain a soul.

Firstly, it looks truly stunning. Pixar really are leaps and bounds ahead of their competition in this regard. Much fuss was made of 2010’s Tangled being the most aesthetically pleasing animated film of all time (Walt Disney played the “female lead” card with that film too because she wasn’t a damsel in distress. We get it, women and men are equals. This isn’t the 1950’s. It’s a given now isn’t it? Let me know when you make a bloody Labrador the lead ok?!), but this blows it out of the water. You also cannot talk about the quality of an animated film without also discussing the voice work. And whilst Brave doesn’t boast A-list Hollywood royalty, it does a fantastic job. I’m very glad of this actually, considering the film’s Scottish setting. There’s nothing worse than a US actor having a ham-fisted attempt at a Scottish accent. You can’t pull it off. Don’t try.

I particularly enjoyed Billy Connelly‘s turn as King Fergus: a rough-and-tumble leader who’s indebted to his loving wife, but also encourages his daughter’s tendencies to wield weapons and act more like a warrior, much to his wife’s disdain. Credit also has to be given to Kelly Macdonald for taking the lead and running with it. Although Macdonald is far older than her on-screen character, she pulls it off. She’s come a long way since 1996 where she starred in Danny Boyle‘s Transpotting. From a tale of heroin-addicts in Glasgow to a tale of a fiery princess… also based in Scotland. 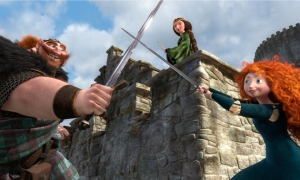 “There Can Only Be One!” Oh wait, wrong Scottish-themed movie.

Sure, it all comes to a head in that saccharine way you expect of animated movies, with no emotionally devastating curveballs (ala Up!), but the story does opt for a charming take on reconciliation between mother and daughter: one that you wouldn’t expect. Although you will wonder why the witch in the movie is still in employment considering her panacea cure-all approach to spell-weaving. Why’d they all have the same outcome? It was also very refreshing to see a movie that doesn’t rely on the cliché guy-meets-girl love story. And no, that’s not a spoiler, as that’s not what the film’s about so reel your anger back in if you thought that was spoiling anything about the movie.

The film’s scope also merits discussion. Pixar and Dreamworks both have a tendency to tackle epics. Not quite Avengers Assemble style epic, but epic nevertheless. How To Train Your Dragon, another Scotland-based romp, is apt here. In that our young protagonist strives for independence and earns his father’s respect. The film also culminates in a whopping great battle – a feast for the eyes. Brave is nothing like this; it’s very pared back and the story never leaves the Scottish glens. Yes, it would be odd to see Merida fly off into space or battle massive super-villains, but there was a lack of “final conflict” between her and anyone. Here the hero wins with love and words, as opposed to steel and bravery, which is ironic considering the title of the film. Some will mourn the loss of such a climax, whilst others will be happy to see a more focused story. The only way to find out is to judge for yourself.

Brave is another shot on target for Pixar, even if not squarely in the bullseye. Whilst it’s not in the same leagues as Toy Story, Monsters Inc. or Wall-E, it’s certainly no Cars 2. Mind you, considering how high Pixar’s standards have been, this is nothing to be ashamed about. Whether the film has the lasting appeal of its contemporaries however remains to be seen. You can’t judge whether a film is a classic without the passage of time.

That is unless you’re the 800 year old Pagan witch that’s still reading this review. For you, it’ll take no time – just mix 56 Bavarian herbs and spices, the blood of a deer and liquid of the scarlet bull and there you go: a potion to see the future. Either that, or it’s how I ended up in ER last weekend. Can’t remember which… I’ll try again and let you know.