Ah, Tim Burton. Tim, Tim, Tim… I’ve never really been a fan of your work if I’m honest. I’ve seen much of it, but never felt that rabid urge to sign up to the fan club. Or even admit to really liking your films. Sure, I enjoyed seeing Edward Scissor Hands as a youth (even if I did get it confused with Lawnmower Man – too many garden appliances), and I also quite enjoyed Beetlejuice, but since then? Not so much. I remember seeing The Nightmare Before Christmas at the cinema and being particularly unimpressed, despite my age. I remember 1993 much more for Jurassic Park – now THAT was a film. A hulking behemoth of a movie, but The Nightmare Before Christmas? It was a little weenie in comparison. A forgettable, little weenie. So when I saw Frankenweenie (see what I did there?) was coming to screens at the same time as ParaNorman and Hotel Transylvania, I just lumped them all together as “might see”… then I actually saw Frankenweenie…

If you love the retro feel of this, you’ll dig the film itself…

Well well well Mr. Burton, this I did not expect. Frankenweenie is perhaps the finest animated film I’ve seen this year, or in recent memory. The story follows a young, clever and introverted child by the name of Victor Frankenstein (Charlie Tahan) and his faithful dog Sparky. Tragedy strikes when Sparky meets his maker in an untimely fashion, but after some sadness, Victor uses his superior intellect to resurrect Sparky through the use of lightning and electrodes. It’s alive… IT’S ALIIIIIIIVE!!

Ok, so it sounds like Frankenstein, but with a dog, as opposed to a human. And therein lies the genius of this film: it’s very referential to horror and sci-fi films that have gone before it. Whether it’s a toilet scene bringing to mind that of Jurassic Park, the naming of characters such as Victor Frankenstein, Edgar “E” Gore or Elsa Van Helsing, or even the inclusion of footage from Horror of Dracula with Christopher Lee. It’s all there. And there’s probably a hell of a lot of stuff that I didn’t spot. This is a true Easter Egg hunt for horror purists. Search and you shall find.

Although you could probably fit the plot of Frankenweenie on the back of an envelope, it’s told incredibly well. The characterisation is fantastic and definitely Burton. This would normally put me off, but not here. He’s gone back to his roots and brought out that spooky and odd writing of old. All of this is rounded off with true off-the-wall humour that made me think of Mars Attacks! more than anything else. In saying this, I didn’t hear a single child laugh over the course of the movie. Now, I said that ParaNorman had the same issue, but kids did laugh – at physical comedy. Frankenweenie is a much more solemn affair and the humour is aimed squarely at a more mature audience. The film looks beautiful, which will entertain the children, but it won’t have them laughing and squealing with delight. It may therefore be suited to a more intelligent child. But everyone thinks their kid is a genius right? But if you’re being honest with yourself, does your child enjoy being creative and painting vivid scenes with poster paints? Or does he/she simply just mix all the paints into a brown mess and claim it’s a “bunny wabbit”. That child wouldn’t suit this film. Sorry. You child isn’t a genius. But I hear Madagascar 3 is incredibly funny…?

Back on track: I mentioned the visuals. Obviously the first thing that strikes you about the film is that it’s in black and white – all of it. Don’t expect the colour to appear somewhere. I read that Burton was set on having his world shown in this way. It’s a brave move, but it really works. I can’t help but feel that The Artist‘s success made film companies a bit more interested in the nostalgic approach to film making, but regardless – it’s certainly helped Frankenweenie. And the animation? Flawless. All of the characters are very “Tim Burton” – big heads, massive eyes and odd teeth. It’s very stylised and stylish. I loved it. 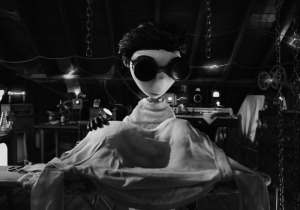 Ultimately, I couldn’t get enough of this film. Some of my US-based critic friends. notably Keith & The Movies and Papa Kenn Media (check them both out) had alerted me that this might need to be seen and I wasn’t disappointed. As I said at the outset, I’ve never been a Tim Burton fan. I think his reliance on casting Johnny Depp and Helena Bonham-Carter in everything put me off somewhat. That and the fact that he hasn’t had an original film idea in a good while now. This changes all that. Although I still won’t be signing up for that fan club, I can wholeheartedly say that this film is fantastic. Thoroughly engaging and true eye candy, with enough horror-centric references to sate old school horror fans, as I’m sure Burton himself is.

So Mr. Burton it seems I owe you an apology. Well, not an apology… an admission. Although I think the vast majority of your work is forgettable and ultimately underwhelming, I loved Frankenweenie. It really struck me as a lovingly put together film that really drew upon all of your inspirations as a child. Also, thanks for not casting your wife or Johnny Depp (your other other half) in this film. No disrespect to them, but it made the film so much more refreshing without them.

Might I make a recommendation to you though? Let’s not reanimate the corpse of Frankenweenie. I don’t want to see Frankenweenie 2: Revenge of the Felines. I think it should stay buried, and not in the Pet Sematary, because we all know what happens there too… Cheers, The Phage.