I’m pretty partial to the month of August; it’s sunny, the days are long and I just generally feel that all is well with the world. Way better than the gloomy dark depths of winter where the only comfort you get outside is from an idling bus that’s parked beside you on the pavement. Good times. Woeful times. But then again, the winter is a good time to get inside to your local cinema or theatre and take in a film or play. In fact, these events are way more fun in winter… and not just for the warmth. So, this brings us to a play that’s now become a film! See… see what we did there? All a cunning link! Welcome to August: Osage County. 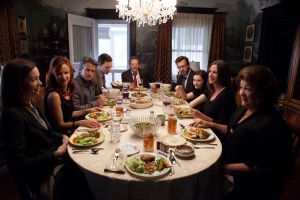 August: Osage County tells the take of the somewhat dysfunctional Weston family as they deal with the death of their patriarch. At the core, we have Violet (Meryl Streep) a wife and mother that’s simultaneously dealing with advanced mouth cancer, a pill addiction and the death of her husband. Violet’s an astute woman, but also one that’s prone to outbursts and putting the cat amongst the proverbial pigeons. These pigeons? That’d be Violet’s daughters Barbara (Julia Roberts), Ivy (Julianne Nicholson) and Karen (Juliette Lewis) and sister Mattie Fae (Margo Martindale), plus their associated spouses that include Ewan McGregor, Benedict Cumberbach and Chris Cooper amongst their ranks. As you might have assumed, this is a very character driven movie: one that tells the tale of life, death and all the arguments that fall in between. 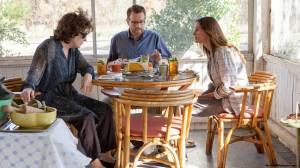 As I alluded to in the introduction, August: Osage County once begun its life in theatreland, which is highly evident throughout the run time of the film. Some of the sets are nigh-on replicas of what you would envisage to be seen up on stage. All of this lends itself perfectly to letting the characters and acting truly shine, as this is where the strengths of the film truly lie. I mean, look at that cast! With Meryl Streep you know what you’re going to get – a solid performance. But her portrayal of Violet is captivating; she veers wildly from caring and understanding mother to outrageous, totally non-PC hellraiser. Obviously, embodying someone that’s addicted to medication and suffering from terminal cancer calls for someone with some good acting chops, and obviously, Streep is more than capable of this!

Saying that, her supporting cast is nothing to be sniffed at, particularly Julia Roberts. Now, I’ve never come to associate Roberts with spell-binding roles. This is probably my fault, as I never actively sought her out in films. Hell, she’s no Bradley Cooper (no, this isn’t me proclaiming Cooper to be the King of Acting 2014… just that The Phage has a soft spot for the guy, and we actively seek him out in EVERY role… even Long Hot American Summer (which sucked)). But here she truly shines. This doesn’t come across as “acting” but “living”. I was totally sold on her role and couldn’t help but emote with her as the film progressed. 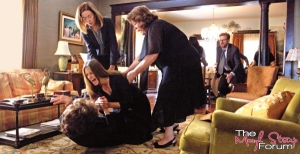 This brings me to the plotting of August: Osage County. At first, I won’t lie, I was a little confused about where the film was going to head. The first third, whilst enjoyable, wasn’t wholly engrossing. Thankfully, this was just a “scene setting” exercise. By the midway point I was sold and was captivated by proceedings. There are plot twists and then twists on the twists. I like this. No, I love this. As long time readers will know: I’m not a fan of linear film telling. I like to second guess and then second guess my second guesses. I’m not sure if that means I’m fourth, sixth, or eighth guessing myself. Regardless, the plot was excellent. This is coupled with some truly heart-warmingly funny moments peppered throughout. This isn’t a comedy film per-se, but the elements of humour are scattered throughout and work beautifully.

All in all, August: Osage County is a powerful piece of film making that’s truly driven by a superb ensemble cast. Whilst the film is slow to build and may lose some in this time period, it rewards those that are with it for the long haul. Obviously, the film is here to compete for golden statues, but as I’ve said before this year: it’s another very tough year… who knows who’ll win! But head out to see August… in winter… What lies inside is a touching film that makes you smile, makes you sad and makes you recoil in shock.

A shock that’s more commonly associated with those horrible winter days. After you’ve been hunkering near that idling bus, it pulls off and sprays you with drizzle and envelops you in a cloud of diesel fumes. I’m kind of glad they didn’t make the film November: London County… although you’d certainly get a lot of indoor scenes as it’s too gloomy to head outside. Bit more stabby too.