“The name’s Bond, James Bo-… it isn’t? Ethan Hunt? No? Well, I must be Jason Bourne then right? I’m so forgetful – you know, with the whole amnesiac assassin thing I have going on… What? I’m… Aaron Cross?! Who?” Life as a government trained agent can be terribly hard on the old grey matter. With so many franchises and names bounding around, you’ve got to feel for a character like Aaron Cross; being up against some of the biggest, brightest and down-right bad ass(est) in the field. So with Cross picking up the mantle from Bourne in The Bourne Legacy can he deliver where it matters… even if he didn’t get his desired title of The Cross Conundrum?

The Bourne Legacy, in case your grey matter has also been taxed too hard, is the fourth installment in the “Bourne…” franchise of films. The original trilogy, starring Matt Damon, was loosely based on a set of books from the 1980s by Robert Ludlum. The Bourne Legacy takes its title from the fourth book, which isn’t written by Ludlum, and… has nothing else in common with the book. The film is set chronologically alongside the events of The Bourne Ultimatum and follows a new agent: Aaron Cross (Jeremy Renner), who much like Bourne, enjoys successfully running away from the CIA. With this being a thriller, and my oath to the Nine Realms, that’s all I’ll reveal of the plot, but I’m sure you know the premise after three blockbuster movies!

Let me make one thing clear from the get go: I never worshipped at the altar of Bourne. Perhaps it all went wrong with me watching The Bourne Supremacy before any other of the movies. Sure, it was glitzy, the action was frenzied and Matt Damon was brutal, but it lacked soul for me. Does this hinder your enjoyment of this fourth installment? Well, yes and no. If you’re not familiar with certain key terms such as “Treadstone” and “Blackbriar”, or the premise behind the initial trilogy then the first 45 minutes will be very tough for you. The film doesn’t like to dwell on the past. I understand the need to “get on with the show”, but if The Avengers can summarise a whole five other movies and back-stories so seamlessly, then it’s not infeasible. Even though I knew what these terms meant, that opening act left me feeling cold and somewhat lost. It’s like I’d fallen asleep in the trailers and woken up midway into a film. It was jarring, and not at all helpful. Not a great start. 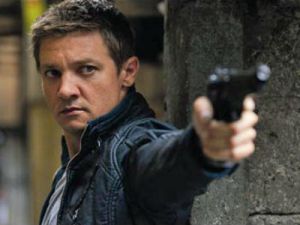 That being said, there is much to enjoy in this movie once you’ve picked up the premise and Jeremy Renner has had a shave (you’ll see what I mean). What ensues is an international game of cat and mouse filled with great action sequences and a constant degree of suspense. Maybe not as much as one would hope for, but enough to sate the appetite. In typical thriller fashion, these events clearly lead to a crescendo… a climactic end sequence… the money job. Whilst it was a thrilling ride, I can’t help but feel that writer and director Tony Gilroy had been watching a bit too much Terminator 2: Judgement Day, as it all came off a tad “invincible cyborg”. You could have switched Renner and “X” with Arnie and T-1000 and felt right at home, even down to “X”‘s origin story and lack of dialogue. Though this T-1000 is no-where near as menacing as Robert Patrick.

It was great to finally see Jeremy Renner again taking the lead in a movie, after recently being locked in serviceable supporting slots in Mission Impossible: Ghost Protocol and The Avengers. He’s deserved a chance to again take the leading role, and I’m glad it’s come. Alongside Renner in the top-billed cast is Rachael Weisz and  Ed Norton as friend and foe respectively. Everyone’s acting is up to scratch, but no-one really excels. There’s no “wow” moment in terms of dialogue or manner of delivery. The film is carried along primarily by the action and the plot. After all, this is a Bourne… movie, so maybe witty monologues aren’t to be expected. That being said, there’s also no excuse for muddying the action scenes with such rabid editing, which made it difficult to discern what was going on on-screen. Just don’t expect such exquisitely shot fight scenes as in The Raid: Redemption and you’ll be fine.

Hawkeye, for the love of God, don’t tell him you thought Mark Ruffalo was a better Bruce Banner… You wouldn’t like him when he’s angry.

One has to wonder whether this will be the last slice of Bourne we’ll be having at our cinemas. Sure, there are six more books, but as I mentioned – this film had nothing to do with the book, spare the title. And unless Universal can convince Paul Greengrass to return as director, we won’t be seeing Matt Damon return as Jason Bourne either. So the future is somewhat open-ended for this universe. A universe I, as a non-avid fan, would be keen to return to.

Overall, The Bourne Legacy is a lot like Usain Bolt after stepping off a theme park ride and into a sprint: unstable on its feet for a while, but eventually gathers itself and tears along at pace. It’s a solid entry in the franchise, but is really hampered by that slow and meandering opening. Although I wouldn’t expect Gilroy to take the novice viewer by the hand for the initial 15 minutes, explaining previous plot points, I would expect more exposition to improve on that opening.

The beginning of Aaron Cross’ story is intriguing, but isn’t yet enough to cement him along the A list of on-screen agents. But thankfully, he’s not with the reject pile of Johnny English and those damn Spy Kids either. But maybe I just prefer my agents to quaff shaken martinis, make sexual puns about “brushing up on a little Swede”… and lamentably parade around in Speedos, as he insists on doing in recent years.