Horror. The genre has the potential for producing the most memorable films you’ll ever see. The ones you can’t escape, not even in your dreams; they haunt you and pursue you. For me, it was all about Ghostbusters II when I was a little Phage. That film spooked me something wicked. Every night I’d see Vigor, the scourge of Carpathia, warping his way out of a wall and walking downstairs to get me. That was terror. Since then, I’d say I’d been spooked by the finale of The Ring when I was in my mid-teens and by the closing sequence of Rec, which was intense to say the least. But everything else? Meh. Nothing terrifying has come my way. A horror doesn’t have to be terrifying, but if it chooses not to go that route, it best opt to have one hell of a story. Luckily, Mama delivers in this department. 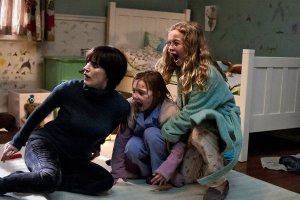 Mama comes with the name of Guillermo del Toro flanking it on every piece of press and publicity. However, it’s important to note that he’s merely an executive producer. Nothing wrong with that, but all too often these types of producers have little-to-no impact on what you’re seeing on screen. But all that being said, don’t let this dissuade you off the film. The premise of the film is quite simple: two young girls, Victoria (Megan Charpentier) and Lilly (Isabelle Nélisse) are kidnapped by their homicidal father and taken to a cabin in the woods, where he plans to finish his series of executions. However, something’s lurking in that cabin. Something paranormal. And this paranormal entity doesn’t like homicidal fathers. So once he’s taken care of, the spirit chooses to take care of the girls as its own, as their Mama. So when the girls are found living wild like savages, they’re taken back into the real world. But Mama likes to keep an eye on her girls… even when they’re housed with their Uncle (Nikolaj Coster-Waldau) and his girlfriend Annabel (Jessica Chastain).

Essentially, Mama struck me as a cross between Paranormal Activity, Poltergeist and something akin to The Ring / Dark Water, all with a very “outworldy”, del Toro-esque layer of makeup. Now, this sentence may have put you off entirely, but that’s just the vibe of the film. What lies within is arguably far better than I’ve made it sound. I use these films as reference points owing to the fact the film focuses on children and their interaction with an ethereal being. It definitely has that sense of innocence about it where children will happily befriend a demon… something they always seem to do in these movies. Funnily enough, I actually befriended Vigor in my dreams eventually. I went for a swim in the pink ooze and all was well. I cured myself of those nightmares forever, but that was thanks to some lucid dreaming techniques that I picked up and less to do with me wanting to be best mates with a ghoul.

So far, so good. But what really held my attention here was the story, and not the scares. Horror movies nowadays are horribly shallow affairs filled with LOUD NOISES and jarring camera angles. This isn’t horror to me. Whilst Mama has some effective scares and some memorable frights, I was just intrigued as to how the film was going to conclude. All too often, you know exactly how a horror will end. Either the killer is demasked and killed, someone will wander away into the distance for the sequel, or the demon lives on. Tick box 1, 2 or 3 right there. Mama is different because I couldn’t predict how it was going to end. And when the climax appeared to be going in the stale “oh, what a cop out” direction, it takes a left turn and catches you off-guard. I like this! Keep me off-guard, please!

Typically, the actors in a horror movie rarely merit a discussion. They’re dispensable and are merely bodies for the bashing and slaughtering. Whilst I’m not going to praise the actors here for being a revelation in how to act in a horror movie, it’s all admirably done. Jessica Chastain sports a rocking new punky look, which suits the tone of the movie, and sells you her despair and pain. Similarly, the young actresses playing Victoria and Lilly do their best “creepy child” routines. But yet again… they’re no Pierce Gagnon.  Speaking of which, why is his only upcoming movie Rio 2? Put him in more live action movies!

Ultimately, Mama delivers where so many recent horror movies have failed; it gives you a compelling plot. Whilst I didn’t fall asleep terrified by the underside of my bed or the agape cupboard in the corner, the film did its job. The visual scares are here and the film doesn’t rely on cheap, loud noise scare tactics to get you to jump. This automatically makes me like it a lot more. And if you’ve glanced down and seen the score we’ve given it and are wondering how we can classify it as that…. well, we’ve been constantly disappointed by horrors over the past year or so and this was a refreshing change of pace. No, it doesn’t reinvent the genre or flaunt any conventions, but it delivers a hugely enjoyable ride thanks in no small part to an intriguing plot.

So will Mama give youngsters nightmares, like Ghostbusters II gave me nightmares? Well, I think it could do! Sure, this chick isn’t Vigor, the scourge of Carpathia – she can’t walk out of paintings (Vigor beat Samara to that coming out of an image trick), she doesn’t turn New York into a city of pink slime, and nor can she make a toaster dance with the aforementioned slime – but she does look quite horrendous. So that’ll do the job. Therefore, if you too want to give your kid recurring nightmares in order to teach them how to lucid dream (a neat trick to pick up), then invite Mama into your home… she’ll take care of it for you.

I’ll be the first to admit I’ve never been a fan of Anchorman and all of its sayings that some fans will spit back at you ad-verbatim like it’s still a fresh and exciting movie, and not something that’s now eight years old. But one quote, or scene, does stick with me – and that’s the one in which Steve Carell‘s character just exclaims “LOUD NOISES!” as his contribution to an argument. It was funny. It was apt. So why am I bringing this up in a review that’s not for The Campaign? Well, because I don’t think there’s any other phrase, spare “LOUD NOISES!” that really sums up horror movies of the past five years. Does Sinister follow this well trod path, or is it something altogether more… sinister?

The set up for the film is that true crime author Ellison Oswalt (Ethan Hawke) moves his family to a new town so that he can write his new book about some grizzly murders that happened there: a quadruple hanging. Of course, Ellison decides to move the family into the exact house where the hangings happened (unbeknown to his family) so that he can draw inspiration from the surroundings and maybe uncover a thing or two about the unsolved murders. But Ellison uncovers a box of film in the attic that explicitly details a series of brutal murders all featuring a rather evil looking presence. Obviously, I can’t divulge much more, but that’s the premise. But is it any good?

Well, it’s a mixed bag. I also can’t help but feel that Sinister and Insidious have more in common than a single word title. Let me make this clear: I thought Insidious was an OK horror movie that had a solid narrative… for the first 2/3 of the film. That last act was appalling and looked like it was shot in a high school drama class. Honestly – the “make up” on the “big bad red faced demon” was abysmal. That whole ending left a sour taste in my mouth. But the main problem with Insidious and Sinister is their reliance on the aforementioned LOUD NOISES! The films rarely employ true terror or fear. The vast majority of the jumps come from cheap amplified noises. This isn’t horror. This is just making people jump. I could pop a balloon behind you right now and you’d jump. It’s not horror or terror – it’s surprise. This is why I can’t really say that Sinister distinguishes itself from the pack. It’s more of the same.

I will however say that the plot, whilst supernatural and a little forced, works well. I enjoyed the general premise of the film as a whole and I really must commend Ethan Hawke here. He seamlessly holds the film together and really slogs it out on-screen. It’s refreshing to have a horror movie that’s genuinely well acted by its lead protagonist. One thing I’ve got to mention though… since when did Johnny “Drama” Chase from HBO’s Entourage (RIP) start acting in films? In the trailers I swore that Ethan Hawke was Kevin Dillon – they look almost identical. I was half expecting to see Turtle and E run on-screen and make the film into a total Bromance (yes, I loved Entourage, and can’t let go of it). But getting back on track: Hawke is brilliant. That’s not to say the rest of the cast are slouches, but they never stood out in the same way. James Ransone‘s Deputy was the comic relief and Juliet Rylance ably portrayed Hawke‘s wife, Tracy, but the children? Eh… less noteworthy. They’re no Pierce Gagnon, that’s for sure. Can’t we cast him in all films from now on? And cast Tom Hardy in there too? I’d pay.

If you shhh it makes the LOUD NOISES even LOUDER!!

Whilst I wouldn’t say I was disappointed by Sinister, I almost knew what I was going to get from the outset. As soon as I see all of these “terrifying”, “you won’t sleep at night” and “best horror of the decade” quotes I’m immediately suspicious. Especially when they come from small-time horror film sites about as big as Film Phage – hey, it’s true, we’re small time  here (for now…). I just feel that either the standards for horror are slipping, or that people have forgotten what it’s like to be truly terrified by a film. Maybe I’m just hard to scare in that regard, but I didn’t feel tense or have an feeling of horror for the entire runtime. It was just interesting. I still say that nothing has come close to capturing the nuanced horror of Rec or even The Ring upon first viewing in a darkened cinema. There’s just too much emphasis on cheap jumps as opposed to psychologically terrifying someone. Although it’s lambasted, you’ve got to credit the original Paranormal Activity for at least trying this and making people doubt their own eyesight. A clever innovation. A clever innovation that will not be found in Sinister, despite Hawke‘s best efforts.

The only thing truly sinister about Sinister is how they managed to amass so many positive quotes from fellow critics that made the film seem the equivalent of a live-action ritual sacrifice with demons emerging from the lacerated corpse. Instead what we have is a film with a solid plot and a dodgy sound system that spikes way too often.

I’ll say one thing: Sinister beats out The Possession as best horror film I’ve seen in the past few weeks, but considering that’s its only competition that’s not saying much. With only Paranormal Activity 4 and perhaps Silent Hill: Revelations still to go, it could be another very unscary Halloween. LOUD NOISES!!!