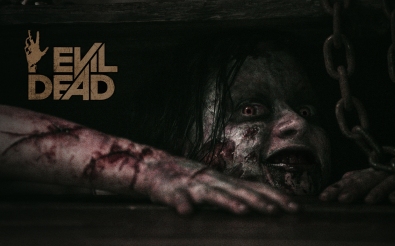 This review should be prefaced by a confession: I went to see this movie with an enormous amount of jet lag. Sometimes you need a movie to keep you ticking over until an appropriate time in order to get your life back in order. By the same token, this review is also being written with the same aforementioned jet lag to achieve the same aims. Therefore, this could be the best Film Phage review you’ve ever read, or possibly one of the worst. That’ll only become apparent in two or three days when I’ve had time to look back on this and wonder why I should / shouldn’t do this more often. So, what movie did I choose to keep me awake following my trip to the Orient? Why, Evil Dead of course… it seems wholly appropriate that a horror movie should keep me alert and awake… shouldn’t it?

Clearly this means read me…

Evil Dead… the name’s familiar right? Yes indeed, you’re looking at the 2013 retelling / reimagining / regurgitating / re-something-ing of a Sam Raimi horror classic. Is this a horror classic that I’ve seen? Sadly, I’m going to attest to have never seen the original, but I know lots about it and its successors in the franchise. The premise of the film? An unholy book has the power to summon forth a demonic force that’s questing to consume souls in order to unleash an untold darkness on the world. Time and time again, people reopen the book, read its incantations and bring about all kinds of merry hell. So it’s no surprise to find that our intrepid group of 20-something’s have also stumbled upon this book whilst staging an intervention for one of their friends. Can they survive the onslaught?! 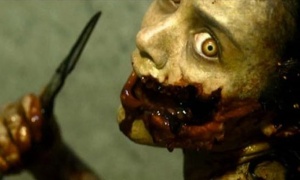 It all sounds very Cabin in the Woods-y doesn’t it? As that film was intended to send up the genre in its own unique way, then that’s not entirely surprising. However, Evil Dead has tried to carve a niche for itself by billing itself as the most terrifying film of the year. Yawn… something we’ve heard time and time again, from film after film. But does this film achieve it? Well, if terror, for you, means buckets of gore and mutilation, then yes – this is certainly a decapitated head and shoulder socket above the rest. Wow, Evil Dead really doesn’t go lightly on the claret; there are gallons of the stuff. But does this appeal to me? Well, not in a horror fashion, no. As you’ll be aware, The Phage is a fan of cerebral horror that chills you after you’ve left the cinema… this isn’t one of those films.

That’s not to discredit the film as a whole, as it’s shot beautifully and exudes malice and grime in every shot. Especially when the possessions really start taking a grip. This is very noticeable with the lead, Mia (Jane Levy), because when she looks deranged and evil… well, she certainly achieves her aims. Credit needs to go to the effects artists and the vision of director / writer Fede Alvarez who’s done a bang-up job of revamping (re-zombie-ing?) the franchise for the 21st Century.

Where the film falls flat for me is the fact that it’s all so very flat and transparent in terms of plotting. The acting sometimes comes across as hammy and the lead characters are as moronic as ever. We currently want our “meat” to have some brains in an attempt to outsmart the encroaching evil before it’s way too late. As I said at the outset, I’ve not seen the original Evil Dead, and I’m aware that this deviates somewhat from that plot, but still… it’s not deviated down a more complex avenue. It sometimes felt like I was watching a made-for-TV horror movie that you’d find on a cable channel late at night. Sure, the effects are lavish enough to merit it being a cinema-wide release, but you just can’t get away from the acting / character’s writing. Why don’t they just leave at the first instance instead of wading in until they’re in too deep?

Ultimately, Evil Dead is a re-imagining of Evil Dead for the new generation – the ones raised on the Saws of this world. You want gore? You got gore! But how about realistic gore, and not the comic kind? Then this is definitely your beast. However, if you’re seeking something more beneath all the blood and gore then you’ll be disappointed. It’s great to see horror relying more on visual disgust than cheap scare tactics, but that’s not enough for me to brand this a great movie… maybe when it’s reanimated in the inevitable sequel?

But maybe I was just too damn tired to really appreciate the film fully? It certainly kept me awake, but so too would a stroll down a street. I could argue that both would be equally scary. Have you ever tried walking along with your head flopping about like one of those nodding dogs that are left in cars? No? Well that’s my jet lag for you. It feels likes it’s wobbling around so much that it’s going to fall off my shoulders; much like some of the dismemberments seen in Evil Dead actually… So there may be some similarities between jet lag and reanimated corpses… or it may just be that I feel like the Evil Dead right now…?