School and university… they’re formative institutions for many people. You get an education, make friends, and the more liberally-inclined would say they “find out who they really are”. I guess it’s a better place to “find yourself” than on a beach in Thailand though, which is where so many middle class 21 year olds from the UK will tell you. Seeing films set in universities or schools is nothing new; it’s been done time and time again. I think Hollywood actually gave me an impression of what to expect from university: girls, beer and hijinks. Not all of it came true, and I never saw a single red cup at a house party. That seems to be very US-centric… thanks for that American Pie! But the current film doesn’t bring up beer… it’s a kids’ film after all. But it does (scratch on) girls and hijinks… Yes, Monsters University has rolled onto campus, but is it the class clown or is it going to graduate magna cum laude?

First… can I just dwell on the title? Does it bug anyone else that it doesn’t have an apostrophe in there? Shouldn’t it be Monsters’ University? I guess I can let it slip though, and someone will probably enlighten me as to why it shouldn’t be in there. I’m sure they wouldn’t have let that slip! Anyway, Monsters University is the prequel to 2001’s hugely successful Monsters Inc. – yes, that’s a 12 year gap between instalments in the series. Luckily, Disney Pixar have a great DVD / streaming market, because the target audience this film is aimed at is far too young to even have been alive when the first film came out. I’m not sure why there was such a delay in this happening!

Thankfully though, we see the original cast return: namely John Goodman as the voice of Sully (big, blue and furry) and Billy Crystal as Mike (small, green and eyeball-y), plus a whole host of other favourites that fans will recognise from Monsters Inc. Essentially, Monsters University goes back to Uni (who’d have guessed that?!), where Mike is the geeky try-hard student of scaring, who isn’t actually scary, whilst Sully is the cocky, “I don’t need to learn” type that is scary… but can’t apply himself. Mike and Sully turn into rivals, but are kicked out of university… the only way they can get back? To join the house of OK (Oozma Kappa) – a group of monsters that are going no-where. They’re the outcasts – the bottom rung of society. Only by joining OK can they enter the Scare Games… their one chance to get back into their course… but can they work together? 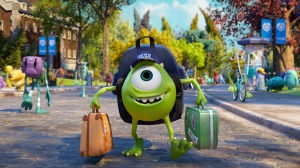 So, you can probably figure out how the plot’s going to play out, as it’s a bit contrived and obvious. But as is the case with so many movies aimed at the younger demographic, that’s to be expected. What’s also expected in these types of movies is humour – both for the kids and for the adults in the audience. This is what’s made Pixar such a gold standard over the past two decades… but Monsters University doesn’t quite hit all the high notes it should do in this regard. The screening I was in had the perfect split of kids and older audience members, but laughter was at a bare minimum… from both demographics. Normally, I’d expect the children to be laughing at this type of movie, but you can only imagine that some of the laughs were lost owing to the setting for the movie: university. No pre-teen kid will have much of an idea of what university entails. It’d have been wiser to set this Monsters instalment in school – a concept that could be latched upon by kids and adults.

Then again, the university setting didn’t elicit copious laughs from the older audience either. In all honesty, the script just wasn’t that funny. Endearing? Yes. Funny? No. I don’t expect belly laughs, but I do expect a wry smile to creep over my face quite frequently, but it was sadly lacking. Don’t get me wrong here – I enjoyed the movie and the runtime evaporated in no time, but I didn’t get the series of laughs that I was expecting from a movie like this.

What I did enjoy were the gorgeous visuals we’ve come to expect and the colourful supporting cast that rounded out the Monsters University world. It all came together well and made the world “pop” – something that Pixar has always been quite adept at achieving. As previously stated, the plot was quite formulaic and the laughs weren’t ten-a-penny, but the film itself? A success… even if it wasn’t quite the big bombastic return of Sully and Mike that I was expecting.

Monsters University enriches the world set forth in Monsters Inc. and contains a lot of fan service in terms of cameos and “origin stories”. Whilst it seemed to miss the mark with the audience I was viewing with, it nevertheless maintained a fun, upbeat vibe that had me compelled from beginning to end. It may not be Pixar’s finest film to date, but it’s another solid entry in their catalogue. Besides, sometimes it’s just good to spend time with old friends yet again. So long as they’re not Cars… or Planes…

So whilst Monsters University isn’t a new American Pie 2 in the way it portrays university, it hits a lot of the right notes. Sure, we have no beer pong, no foul language and no sex with pies, but we get the right vibe from it all. Although having said that, I’d like to have seen how the characters would have coped if you’d merged the two aforementioned franchises. Would Stifler pick on little Mike? Would Sully assume the role of Oz the star lacrosse player? And just how would the film deal with the thorny issue of “exotic” magazines? Stay tuned for Monsters Go Wild…