Viruses. As The Phage, I’m pretty savvy on them. Those that know me outside of my alias will know this truth to permeate through my professional life too. So, any movie that deals with viruses and plagues best get its ducks in a row, because I’m going to be biologically clued up. As sad as it is, if something’s grossly wrong with the science, I won’t be sold on it. I know… such a geek. By a similar extension, The Phage is also a big fan of all things “zombie”. Ever since we clapped eyes on 28 Days Later we were sold on these creatures – these abominations. This is what’s led us to worship at the altar of The Walking Dead and glorify Max Brooks‘ incredible book, World War Z. So, when we heard about the big screen version happening… well, we were excited. Really excited. The book has such rich source material and is written in such a compelling manner that you can’t help but KNOW it’ll be a success, right? Right? 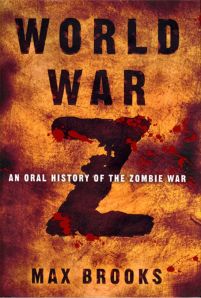 Well, it would be if the film followed the book in any which way. World War Z (the book) is an oral retelling of “the war” by a journalist travelling the world and talking to survivors about their experiences throughout the outbreak that would ultimately wipe out a huge chunk of humanity. It was gripping, it was vivid, and it was varied. It still stands as one of my favourite books, and I encourage anyone out there to go and read it. World War Z (the film) eschews all of these ideas and goes with something entirely more… formulaic. Here, the film follows Gerry (Brad Pitt), his wife Karin (Mireille Enos) and their kids as they try and escape New Jersey after the plague hits the US east coast. Gerry’s separated from his family as he’s brought back into the UN in order to try and track down the root cause of the disease and hopefully find a cure. None of this happens in the book. Not a word. But does this make it a bad film?

In a word… no. World War Z isn’t a bad film, far from it. It’s a big budget, globe-spanning zombie movie that will no doubt please many hoping for a different take on the genre. For instance, there’s remarkably little blood! For a zombie movie, that’s unheard of. It also features a lot of dialogue and piecing together what’s happened. It’s not all “run run run”, like so many others have been in the past. It’s entertaining. Having said that, it’s not without its flaws… mainly owing to the fact that it’d rather have a flurry of activity and try and overwhelm you with numbers than make you truly care about the protagonists or feel the personal intensity that it should do.

Obviously, the star of the show here is Brad Pitt. There’s no two ways about this, as he’s the only listed name on the posters. It’s “his” movie. How’s his performance? Well, it’s Pitt isn’t it? Of course its solid. It just feels as though his character is a tad underwhelming. I never felt any empathy with him and never really cared for his family’s plight. I just wanted him to do his job and identify the cause of the plague. I mean, I already know the cause from reading the book (clue: it doesn’t follow the book at all), but I was keen to see how the movie would deal with it.

I’m very tempted to launch into a tirade here about how it’s “not like the book”, but I’m going to try and resist. Normally, I don’t like those purists who bemoan adaptations, so I’m going to try and not be one of them. But let me look at this through another set of eyes: zombie eyes. When I think of apocalyptic modern zombie horror I think of either The Walking Dead or 28 Days Later / 28 Weeks Later. Both of those movies show desperation and plight. They also do fantastic jobs of bringing the undead to life – particularly The Walking Dead. But that was lost for me in World War Z. Firstly, the majority of the horde are CGI. This isn’t a great thing. I understand they wanted to emphasise the scale of the conflict, which would call for a ton of extras, but the CGI just didn’t look too good either. But then… when you do get real zombies acted by humans? They’re still not that impressive. The final scenes in particular are laughable. Can someone please tell me why the creative team behind World War Z decided to model the zombies on parrots? Why do they make that weird caw-ing noise? Why do they randomly make biting noises with their jaws? And why do they look at you from the side, like they’re birds? I want my zombies making noises like in 28 Days Later – deranged, maniacal, angry grunts. If you’re going to do speedy zombies, at least get the noise right.

Finally, I want to draw attention to the ending. The ending that was changed at the eleventh hour. As a virologist by training (damn, my secret’s out), a lot of what they were saying was utter nonsense. Complete. Nonsense. The biological leaps astounded me and appalled me. They could have hired me to do a better job. And the solution that’s reached for their problems in the film? Ouch… just pure stupidity. And also, nothing from the book too. At least they’ve left it all open for the sequel. The sequel that Paramount is now committed to making. Maybe they’ll up the gore quota? I just wish they’d gone with the original ending ideas (click here). How deliciously morbid does it sound? That’s how I like my zombie movie tone… dark.

So, maybe I am being a purist here. I can’t help it. I love the book and I love modern zombie movies when done well. World War Z isn’t a bad movie; it’s just struggling to be an effective zombie movie, which isn’t helped by the fact it’s ignored some splendid source material. I applaud the movie for skipping location a lot and trying to emphasise the scope of the problem, but it just felt rather hollow at its core. In the sequel, I hope they bring in some better prosthetics, a better overall plot and please… bring us some gore. Not excessive, but some of it. I want to fear these Zachs and Zeeks (zombies in the book)… it’s something I just didn’t have with the big screen version of my favourite book.

What do I hope will happen in the sequel? Honestly? I don’t know. They’ve already ignored what made the book so special: the format. I defy anyone to not think that the book is spectacularly novel in its take on zombies. It’s also chilling. Chilling to think that when the war’s over, they’re still there. Think the ocean’s safe? They walk along the sea bed. Think you can freeze them to death? Well, they’re coming back. It spreads. So although World War Z wasn’t as accurate as it could be, my eyes now gaze towards the upcoming adaptation of Stephen King’s Cell – another fantastic tale of zombies… surely that can’t deviate? Surely!?