One version of the UK… sans rage.

If you’re easily influenced by films and aren’t a resident of the United Kingdom, you’d probably assume that its inhabitants fall into one of a number of camps. To Pride & Prejudice fans, we’re dashing romantics living in a land full of whimsy and charm. To Green Street fans, we’re uncompromising thugs and hooligans inhabiting a land of football lunatics. And to 28 Days Later fans… well, we’re the bringer of plagues, in a land of rage-fuelled zombies (a bit like hooligans, but more “bitey”). But don’t judge us in this way – our country has aspects of all these films… OK, maybe we don’t have aspects of 28 Days Later (yet) but you can’t escape the fact that a film can shape your views of the nation or area in which it is filmed. If we go off recent releases such as Killer Joe and The Imposter, we’d infer that Texas is a hotbed of child abduction, white trash and murder. So, with all that said, what does the UK’s latest comedy film, Keith Lemon: The Film, say about us and our fair country?

Well hopefully no other nation will be exposed to this film any time soon, so they’ll never have the chance to form those opinions. But if they did, they’d probably ask “who’s this Keith Lemon character?”, “what’s he saying?” and “is this what’s funny in England?”. Let me explain this for our international readers…

Keith Lemon is a character created by British comedian Leigh Francis. Lemon is a larger-than-life character who says outrageously over the top things to celebrities. Generally these comments revolve around wanting to “get intimate” with them and himself. And that accent? Leeds – a city in the heart of Yorkshire (not near London). The character’s been enormously successful for Francis, as he not only hosts his own quiz show (Celebrity Juice), but an innumerable amount of spin-off shows. And what’s the obvious next step? To scribble down a “script” and cobble together a movie to milk that cash cow whilst she’s good for-a-milkin’!

With that explained, I feel I can continue. You see, I was tempted to forgo my normal review stylings and just invite you to this page to read one word:

But I decided against that, as I’m sure you love reading about a bad film as much as a good one right? Well, I do. I don’t like middle of the road nonsense. I like a polarising film, and this is polarising alright. It’s the equivalent of magnetic south, if “magnetic south” translated as “garbage”. The film follows Lemon, oddly playing an unsuccessful inventor who’s created a security pole. This doesn’t work out for him, and through fortuity he creates the “Lemon Phone” (a smart phone with a yellow lemon on the back). He becomes a billionaire, gets wrapped up in fame, dates Kelly Brook… Are you still reading this? The plot is nonsense. It’s something a group of 11 year olds would imagine at a slumber party. In 5 minutes. Before they realised how stupid it was. 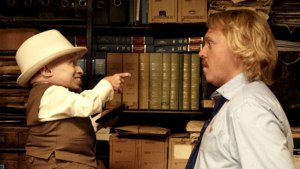 It’s funny because he’s a lot shorter and has to sit on an elevated platform. Get it? Nope, us neither.

Now, I’ve nothing against Francis‘ Keith Lemon. I quite enjoy the Celebrity Juice panel show he hosts. He’s very sharp and knows how to get a rise out of his contestants on a weekly basis. It’s funny. This just isn’t. It’s a number of tired sex gags tied together with appearances from B and C list celebrities that I doubt anyone from outside the UK would recognise. Rizzle Kicks? Peter Andre? Paddy McGuinness? Recognise these names? Thought not. I’m already regretting bolding their names. The “known” international “stars” such as Verne Troyer (Mini Me in Austin Powers), David Hasselhoff (Baywatch… you knew that one) and Kelly Brook (Piranha 3D – she swims naked with another girl, remember?) are hardly setting the world alight either. All supporting performances are phoned in, or just come across as very cringe-worthy, especially Brook in the finale. Troyer can act but has a flat script and Hasselhoff can also deliver those nonchalant “I don’t want to be here” lines that can make you smirk, as in Piranha 3DD, but they were also absent.

I know this is meant to be a tongue-in-cheek movie and is probably not intended for me, as I’m post-pubescent. But my screening also had that “target demographic” of teens. And did they laugh? Nope. In fact, I counted a total of three walk outs during the film. That’s impressive for an 85 minute runtime! Hell, I’ve seen The Three Stooges, which I was gearing up to brandish as “Worst Comedy of the Year” (until now), but no-one walked out of that. And this movie even featured bare breasts, ejaculate AND “celebrities”… what more could your average hormonal teenager want out of life?! Seemingly whatever’s outside the screen’s exit doors at 40 minutes in.

Keith Lemon bounds onto our screens in what has to be one of the most ill-judged and ill-received moves from television to the big screen. Not even Harry Enfield‘s Kevin and Perry Go Large can compare to this train wreck of a movie. At least that had Rhys Ifans, some quotable lines and a good 90’s dance soundtrack. At the time of writing, Keith Lemon: The Film is pulling in a whopping 0% on Rotten Tomatoes; joining the elite club that also houses Highlander II and Eddie Murphy‘s classic A Thousand Words.

So what does Keith Lemon: The Film suggest about the United Kingdom? Probably that we speak with funny accents, have an absurd sense of humour and that we have numerous ways of describing sex, breasts and genitals. I guess it at least makes a change from describing us as “stabby” or “bitey”…