Comic-Con… An event that used to be regarded as the time of year when pale, socially awkward creatures would gown up as their favourite science fiction character, brave the Californian sun, and make their pilgrimage to meet the stars of thatshowyou’veneverheardof and itwasbiginthe80’s. You need look no further than that barometer of public opinion, The Simpsons, to see how these events were seen… Remember the baying hordes asking Lucy “Xena” Lawless the most absurd and nerdy questions in a scene from 1999’s Treehouse of Horror X? Or for those less familiar with the intricacies of the series, you’re surely aware of Comic Book Guy, the rotund, sarcastic and single comic book shop owner? Well, fill a hall with people of this calibre and that’s how this event was rightly or wrongly seen back in yesteryear. No more.

Jump forward a decade and Comic-Con is firmly marked on every film enthusiast’s, entertainment magazine’s and large film studio’s calender next to the award ceremonies. Why? Well, it’s not to catch a glimpse of some of the phenomenal Cosplay costumes, but to hear about the latest announcements on the current darlings of Hollywood: the comic book movie… and this year was exceptional. 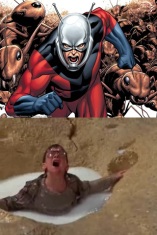 Ant-Man: Coming soon to a cereal bowl near you!

The  “House of M” (Marvel), coupled with the “House of Mouse” (Disney) really brought the goods this year; probably their best outing since the entire cast of Avengers Assemble was erm… assembled on-stage at the 2010 expo. It really is telling of how far Comic-Con has come in recent years that Robert Downey Jr. and Don Cheadle – two of Hollywood’s leading men – were in attendance. But I’m getting ahead of myself, let’s take this sequentially as opposed to tackling this with the reckless chronological abandonment of Quentin Tarantino.

Proceedings were kicked off with the confirmation that Edgar Wright‘s Ant-Man will indeed see the light of day. Yes, that’s right – that little punk from Honey, I Shrunk The Kids has harnessed Rick Moranis’ awesome shrink gun powers and become a superhero. Ok, I jest… in fact, that little kid grew up and became, well, no-one. Last film? 1992’s Honey, I Blew Up The Kid. Not all film roles are kind to you. Funny that these two films perfectly encompass Ant-Man‘s eventual powers: the ability to shrink to the size of ants (and control them) and become gigantic. Though if Wright puts him in a bowl of Cheerio’s at some point we’ll know where the inspiration came from. Kidding aside, every comic fan worth his/her salt knows that the introduction of this hero into Marvel‘s cinematic Universe could spark some very exciting film plots down the line… Tickle this Phage excited.

Next up, we’ve got  Robert Downey Jr. – a man who needs no introduction, but this doesn’t stop him giving himself one courtesy of Luther Vandross. If this man wasn’t so damn charismatic, talented and infectious you’d want to tell him to come off the pompous juice every now and again. Downey (himself / Iron Man), Cheadle (James “Rhodey” Rhodes / War Machine), Shane Black (director) and Jon Favreau (Happy Hogan / exec. producer) of course were on hand to show off footage from the Iron Man 3 film. As The Phage is a bit wet behind the ears and not based in California, we weren’t there to explain the footage to you, but needless to say it sounds fantastic. Notably, it was confirmed that Ben Kingsley will indeed be the Mandarin, although I think the only people unaware of this casting are those that are holed up in bunkers awaiting the nuclear fallout caused by the Millennium Bug to clear in 2023, or you know, they have a life that’s not based on the internet… It’ll be nice to see Kingsley flexing his serious acting chops again after whatever The Dictator was. Due in May 2013 (April for the UK), this is sure to be one to mark on the calender.

In a back-to-back onslaught, the final announcements from the Marvel stable caught some off-guard for polarising reasons. Firstly, the good. We find that the uniquely named Thor 2 and Captain America 2 have been morphed into Thor: The Dark World and Captain America: The Winter Soldier. Although the Thor title has left some room for ambiguity in what’s to come in November 2013, ol’ Cap’ doesn’t. Expect the return of Bucky Barnes, who was last seen falling off a train in an Arctic looking Germany, in 2014.

Oops, there goes the neighbourhood! That, or Marvel’s current run of form.

Now, I like to think of myself as a bit of a comic book fan (see The Amazing Spider-Man review), but the confirmation that Guardians of the Galaxy wasn’t just some ludicrous rumour was… well, imagine the feeling you’d get if you’d just woken up in an alternate reality where Keanu Reeves doesn’t act like a soulless robot from the planet “Woody Woody Wood Wood” and Justin Bieber now fronts Napalm Death… Sure, it might seem like a pleasant surprise on the surface, but it’s just odd. So with Marvel soon introducing an intergalactic Peace Corps led by a talking raccoon, we can expect the “grounded” take on superheroes to evaporate quicker than that punk from Honey, I Shrunk The Kids‘ career. Here at the Phage, we can see the connection clarifying the *Avengers spoiler* Thanos appearance in Avengers Assemble, but do we really crave these heroes…? “They may be the ones the Marvel Cinematic Universe deserves, but not the ones it needs right now…  Because they’re not known heroes. They’re unknown guardians, watchful protectors… a difficult sell to the public.” Speaking of which…

Ok, DC didn’t launch in with a Batman quote, nor clips from the imminent The Dark Knight Rises… Nor does it need them as that particular hype machine is in danger of exploding amid reports it could topple  Avengers Assemble‘s opening weekend take and that negative reviewers are being cyber-lynched left, right and centre.

No, DC had but one film to show for what is arguably their poster boy: Superman, with Man of Steel. Both Henry Cavill (Clark Kent / Superman) and director Zack Snyder (thankfully at a normal frame rate) were on hand to show off some footage and answer fans’ questions. Once again, The Phage was overlooked for a press pass, so no in-person viewing (this will have to wait for The Dark Knight Rises‘ trailers), but the main thing we learn is that yes, General Zod is the villain. Yes, that’s right – the same villain from Superman II back in 1980. Hopefully they’ve updated the General’s fashion sense since then; although they say the 80’s are back in fashion again so maybe he’ll still be sporting some high rise black trousers. Reports on the frames-per-second of Snyder‘s Superman are still pending. Expect to see the return of the other guy who sports red and blue in June 2013. Thankfully, this shouldn’t be an origin story…

I wish there was more to balance out the weighting of Marvel vs. DC Comics in this report, but DC doesn’t have that many burning franchises, aside from Superman and Batman, who’s soon to be retired and rebooted following Chris Nolan‘s trilogy. Rumours abound about a Justice League movie (like the Avengers’ ensemble cast), as well as a Green Lantern reboot (yes, just 2 years after the original), but nothing concrete has been announced.

There really was something for every comic book movie fan at Comic-Con this year. The Phage won’t dip into the reams of other announcements regarding non-film franchises such as The Walking Dead, but needless to say it stood out in so many areas.

So whether you’re a fan of men flying around wearing a cape, Norse Gods with washboard-like ab’s, or talking racoons from space, there was something to get excited about.

And there’s always next year for “that punk” from Honey, I Shrunk The Kids to make his unexpected and unneeded return to the silver screen…