Cinema-goers are an eclectic bunch. The love for film transcends every demographic – old, young, nerd or jock. Everyone’s welcome at the cinema. I’m not sure that should always be the case, as some patrons are slightly more… unusual than others. We’ve all had the misfortune to sit near one. Or maybe you actually are one of those fruitcups that makes everyone else sitting around you either a) incredibly annoyed with you, or b) scared of you. Good for you. Probably. You know the people I’m talking about though; some will guffaw with laughter over the mildest of amusements (replete with thigh slapping), whilst others will actively talk to the screen out loud because I’m sure the characters in the film can hear you and appreciate your feedback. Well, my viewing of Sightseers was definitely one of those viewings and the film lends itself to the screwballs.

Sightseers is a British “comedy” about a roadtrip around the British Isles by Chris (Steve Oram) and his newly-minted and incredibly timid girlfriend Tina (Alice Lowe). The couple travel to the most mundane of British amusements (a pencil factory, a tram museum etc.) whilst towing their caravan behind them. However, there’s a twist. Chris is a little bit psychotic… he’s a bit of a serial killer when his patience is tested. Hilarity ensues. Well, it should… but it doesn’t. Not one iota. 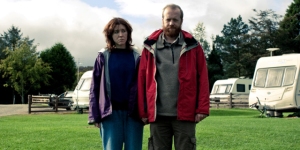 This is an incredibly dark film. So dark that nary a ray of light can penetrate it. I cannot label this a comedy unless you get your jollies from either a) incredibly banal jokes, or b) extreme violence. If this is you… I’d contact someone about that. You’ll know you’re one of these folks if you find yourself talking to a screen at the cinema. If you’re like me however, you’ll leave the cinema feeling incredibly beaten down and slightly unhappy. This isn’t a comedy, so don’t believe the plaudits and opinions some of our bigger and more noticed peers may be throwing at this film.

Whilst I found the initial half of the film incredibly hard going, owing to its humour missing me entirely and the plot blundering along at an incredibly slow pace, I did find my interest improving over the course of the film. The whole “serial killer” vibe is very much a one-trick pony, but I was intrigued to see how the plot would progress and conclude. The two lead actors, Oram and Lowe are fantastic in their respective roles, so nothing can be taken from them. Their characters are incredibly vivid and well-realised, it’s just a pity that I didn’t find myself warming to either of them over the 88 minute runtime. 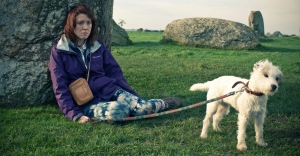 I just struggle to get over the humour of the film. A while ago in my Cockneys vs. Zombies review I mentioned a similar phenomenon wherein there was much knee-slapping from certain audience members who couldn’t get enough of the Brit-themed zombie action. I struggled to see how this was funny in the slightest, despite labelling myself a massive advocate of British comedy. I think it ultimately comes down to a divide in the population. Whilst some members of the public love shows like Peep Show and The Inbetweeners, others will find that humour too awkward and instead opt for Two Pints of Lager and Miranda. I fall into the former camp and cannot tolerate the latter. For my non-UK readers, let me put it a different way. The former two shows are a lot like The Office (US and UK) – quite awkward situational comedy, whilst the latter are the classic laughter-track sitcoms that swamp the TV landscape where laughter comes as a result of someone falling over or saying “bum”. As non-cerebral as you can get.

With that being said, I feel that Sightseers appeals to those in the latter camp. For better, or worse, I just couldn’t identify with this film on any level beyond watching it to review. As I say, it’s not a bad film, and will definitely have its audience out there in the world, but it really wasn’t for me. Releasing it at Christmas was also a peculiar choice too. This is definitely an October film – a dark, oppressive season for a dark, disturbing film.

2012 has been somewhat of a stale year for British comedy at the box office, at least by The Phage‘s reckoning. The Wedding Video, Keith Lemon: The Film and Cockneys vs. Zombies all failed to bring me joy and Sightseers has the same fate. That being said, Sightseers is a very different type of film that may have just been mis-labelled as a comedy. It’s more of a thriller / horror with dark humour thrown in for the ride. Whilst the acting is incredibly convincing, the film just didn’t entertain me. And whilst I’m not averse to a downbeat ending (in fact, I quite enjoy them), the whole film was so downbeat that the ending was just a nail in the coffin for me.

But then again, if you were the person in my screening that proclaimed “oh dear” at the top of your voice when someone died, or you asked questions of / warned the characters on-screen, then you probably thought this was a great film. It seems the UK has more than its fair share of the mentally unstable that frequent the cinema at mid-week. I can’t help but feel that Chris and Tina from Sightseers would be two of those characters. Let’s just hope that person X from my screening doesn’t own a caravan and harbor a homicidal rage. We can but hope.